Spending boost for books and eBooks in Devon and Torbay libraries 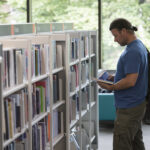 Libraries Unlimited switches away from CDs and DVDs from April

Libraries Unlimited is to spend more money on popular books and eBooks after seeing a big rise in demand in particular for online reading.

At the same time, the number of CDs and DVDs being borrowed from libraries across Devon and Torbay has significantly dropped.

Libraries Unlimited has now decided to focus spending on stocks of new books and eBooks, and to stop buying CDs and DVDs after the end of this financial year in March.

Borrowing of the CD and DVD collection will begin being phased out from 1st April. The CDs and DVDs will then be sold off and the money will be invested back into the charity. Customers should follow social media or contact their local library for more information.

Libraries Unlimited Chief Executive Alex Kittow said: “The pandemic has accelerated a massive change in how people watch films and listen to music. They want streaming services rather than borrowing. And has also shown us that book and in particular eBook borrowing is even more popular. There’s no cut in spending, we’re simply reallocating the CD and DVD budget to where there is most demand.”

The Entertainment Retailers Association (ERA) noted that during the first lockdown demand for digital music, video and games increased by 16.8%, the fastest growth rate since records began, with digital video services such as Netflix, Disney+ and Amazon Prime Video increasing revenues by a massive 37.7% in 2020 over 2019.

Jack Stafford, Libraries Unlimited Service Delivery Manager for North and Mid Devon, and Torridge, said: “We’re mirroring the recent moves in some of the largest retailers like Tesco and other library services across the country, who are clearing their shelves of music and films because paid-for streaming and subscription services are now dominating. In the UK last year sales of entertainment products like CDs and DVDs dropped by 18.5% according to the Entertainment Retailers Association. Across our libraries, during 2020 the borrowing of eBooks increased by 85% on the previous year – a clear indication we need to adjust where we buy stock.”

“We have over 775,000 books to borrow and 23,500 eBooks available for people to download, and library members also have free access to the online Naxos Music Library of classical music which features over 2.5 million tracks. To help with the transition throughout this year, staff will be offering one-to-one assistance to any customers who need help in logging in to the digital options we offer.”

Anyone wanting to purchase CD and DVD stock should contact their local library.