The Friends of Totnes Library recently welcomed British TV executive and former Chair of Arts Council England, Sir Peter Bazalgette, at their regular Desert Island Books event at Totnes Library. Sir Peter was asked to name the 10 books he would take if he was stranded on a desert island, here’s what he had to say…

To be asked to name 10 desert island books is a delicious challenge. It means you can recall all your favourite reads 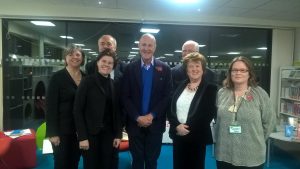 and wallow in them. But narrowing them down is ticklish.

I went for 5 fiction and 5 non-fiction, covering works from 3 centuries and 5 countries. If they excite your curiosity, why not borrow them from your local library?