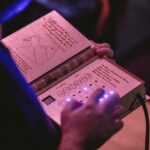 Ten books, sixty minutes, one mystery… Can you solve it?

The Lost Librarian is a ground-breaking escape room for inquisitive explorers of all ages. Using interactive mechanical books, groups of up to six people experience a 60-minute journey, uncovering a fantastical tale of the last known witches in the UK and the legacy that they have left behind. Work together as a team to solve the mystery of the Lost Librarian.

Devised by Lizzie Johnson (Designer / Fabricator / Producer), Kyle Hirani (Technologist / Roboticist), and Matt Gibbs (Writer / Narrative Designer), the project brings together their passion for art, design, technology, and storytelling, as well as their deep love of games and puzzles, to create an interactive experience that is both playful and engaging.

The Lost Librarian herself is Molly Allison, a librarian who has been researching the Devon Witch Trials and the local legends of their ‘Secret Treasure’. To throw off a mysterious rival, Molly has had to hide her research and the treasure within the library, creating a web of puzzles and clues to protect it – the ‘books’ she has made. The technology that powers the puzzles themselves, enables us to present touch sensitive mazes, logic puzzles, and word searches, as well as puzzles that require very different input, such as having to make certain gestures to unlock a clue.

Michael White, Creative Producer at Evolve said “We’ve been blown away by the fantastic feedback from customers, which is a testament to the care, imagination and skill that has gone into creating the experience. After a sell out debut at Exeter Library last year, the Lost Librarian has been touring libraries across the county and we can’t wait to bring the experience to South Molton as our next stop this summer.”

Tickets are available to book via Eventbrite, for £12 per session. Recommended for ages 12+ unless accompanied by an adult. Find out more and how to book at librariesevolve.org.uk/events/the-lost-librarian-south-molton-1

The Lost Librarian is part of the Exeter, UNESCO City of Literature Programme. More on UNESCO can be found at exetercityofliterature.com

Further to the escape room itself, the creative team behind the experience have opened the doors to share some of the techniques behind this innovative production in two free masterclasses available on the Evolve website: librariesevolve.org.uk/watch-now/behind-the-lost-librarian

Matt Gibbs is a WGGB Award nominated writer, narrative designer, and editor. He has worked on games such as DICE’s Battlefield 1, Creative Assembly’s Total War: ROME II, and Ubisoft Reflections’ Driver San Francisco, and is a Partner at Talespinners, a cooperative providing writing, narrative design, and consultancy for games. In Matt’s pre-recorded class you can learn all about writing stories for gaming experiences, from computer games through to interactive artworks.

Elizabeth Johnson is a designer and fabricator for animation, theatre and public engagement works and a resident artist at Puppet Place in Bristol. She has designed physical playable experiences big and small, and in her pre-recorded class she will take you through the journey of designing your own interactive artworks, as well as looking into the creative process behind the Lost Librarian.

After South Molton, the Lost Librarian will continue its tour with a visit to Teignmouth Library later in August, and then to Seaton Library for the October half term.