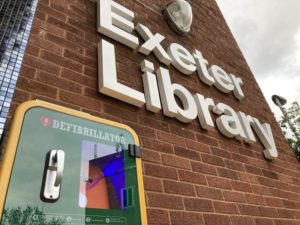 A potentially life-saving device which can restart the heart of anyone who suffers a cardiac arrest has been installed at Exeter Library – fully accessible to anyone in the community.

The defibrillator (or ‘defib’) can be easily operated by anyone with no training, and is positioned outside the building meaning it can be used 24 hours a day. The unit was funded by Exeter investment services company Brewin Dolphin, and donated by city charity Jay’s Aim.

Callum Elliott-Archer, Centre Manager for Exeter Library, said: “Defibs save lives, and we’re really pleased to install one at Exeter Library. It’s right by the front door, easily and quickly accessible if someone did collapse with a cardiac arrest, whether the library is open or not. There are audible and visual instructions on the unit, and once the pads are attached to someone’s chest it makes an assessment as to whether a shock should be administered itself. It really couldn’t be easier.

“Of course we hope it’s never used. But we also believe it will reassure our staff and all the people who visit our library, not only for books but clubs, groups, computers, wifi and a myriad of other reasons, that if they do have a cardiac arrest, this will substantially increase their chances of survival.”

The charity with donated the device, Jay’s Aim, was set up by the family of James (‘Jay’) Osborne from Exeter who died suddenly from a cardiac arrest caused by an undiagnosed hereditary heart condition known as ARVC (Arrhythmogenic Right Ventricular Cardiomyopathy). The charity works to reduce the number of young people who die of sudden cardiac death in the South West by a combination of encouraging people to check of undiagnosed conditions, training in CPR (cardio-pulmonary resuscitation or ‘chest pumps’) and providing defibs.

Jay’s brother Dan Osborne said: “A lot of defibrillators are not public access, meaning they are only available if a building or business is open. The defibrillator at Exeter Library is in an outside cabinet making it available 24/7 – one of only two public access defibs available in the city centre.

“We are delighted to have been able to provide this public access defibrillator to Exeter Library.  It’s especially important to us as it was fundraised for by the Exeter branch of Brewin Dolphin, the company that Jay used to work for.  It’s really great to see an Exeter business provide a life-saving piece of equipment for such an integral public amenity as the library, in the city that Jay used to live. We hope to provide free community CPR/AED training for staff and users of the library as soon as Covid-19 restrictions allow.”

Exeter Library is managed by Libraries Unlimited, the charity responsible for running Devon and Torbay Libraries.