Ciara Eastell, Chief Executive of Libraries Unlimited, has been presented with her OBE Honours by 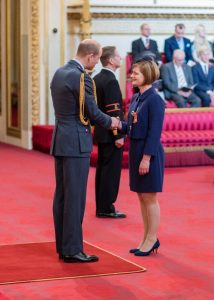 Prince William during a Royal ceremony at Buckingham Palace.

Ciara, who heads up the charity that is responsible for running Devon Libraries, was named in the Queen’s New Year Honours in December last year for her services to public libraries.

With more than 20 years’ experience working in the library sector, Ciara has been leading Devon’s library service for nine years, and in 2016 headed up the spin-out from Devon County Council to form Libraries Unlimited, a staff and community owned charity and social enterprise.

She was awarded her OBE for her national contribution to public libraries as the President of the Society of Chief Librarians (SCL), a voluntary role she held for two years until June 2016.

In her time as President, Ciara was a member of the national Leadership for Libraries Taskforce; a member of the British Library’s Advisory Council and led SCL’s work on developing the Universal Offers, a series of offers around reading, health, digital, information and learning aimed at encouraging more library use within local communities.

Ciara said: “It was a real pleasure to visit Buckingham Palace and be awarded an OBE, and is a day I will remember for a very long time. During my 20 years working in libraries I have met some fantastic people who are devoted to the service and ensuring that libraries meet the needs of their communities. This award is a recognition of the dedication of all of those people and those who have supported me along the way.

I feel very lucky to have been able to play a role in the future of libraries and am extremely positive about the future. Here in Devon we are trialling exciting new projects and services and I very much look forward to working with my colleagues both locally and nationally to ensure libraries continue to flourish.”

During its first year of operation, Libraries Unlimited secured more than £500,000 of additional funding, opened two new libraries and rolled out innovative new services across the county. In addition, the organisation is set to become an Arts Council England (ACE) National Portfolio Organisation (NPO) from April 2018, providing high-quality art events and activities in libraries across the county to appeal to an even wider and more diverse audience.