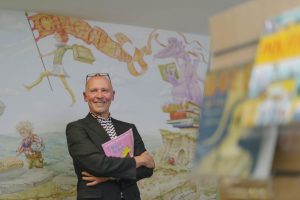 Chagford Library has officially unveiled its unique new mural, thanks to support from its local Friends Group and the talents of a local artist.

The mural, which is inspired by the local surroundings and local characters, was commissioned by the Friends Group and was hand painted by local artist Steve Dooley, who is well-known for his murals and illustrations of author Kenneth Grahame’s classic characters from Wind in the Willows.

The mural was unveiled at a special event on Tuesday 18th June, when library users, friends and local artists and writers were invited to join the library team, Friends Groups and local supporters to celebrate Chagford’s newest work of art.

The Friends of Chagford Library initiated the project alongside the library staff in the hope of bringing alive the children’s library, to invite new and existing users to come and enjoy the space and feel inspired by their surroundings.

The Friends also wanted to pay tribute to their former Treasurer Davon Friend who sadly passed away at age 34. Susan Harley, from the Friends of Chagford Library said: “We wanted to create a vibrant and welcoming space for children within the library, to inspire them to read, tell stories and enjoy the library. We also wanted to pay tribute to our former treasurer Davon Friend, who played a pivotal role in supporting the library and our Friends Group and was a well-respected local character. 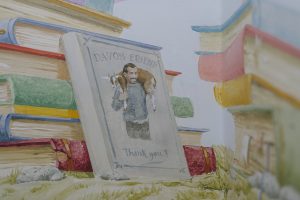 She continued: “We asked Steve to create a mural for us as we all know and love his work. Steve dedicated so much time and energy to this masterpiece and we never could have imagined just how magical it would be. We are so grateful for his support and for providing the people of Chagford with such a wonderful gift that will be enjoyed for years to come.”
The mural is inspired by Chagford’s impressive and unique landscape, and features some well-known characters including Mole and Mr Toad. The mural also features Davon Friend, the former Treasurer, alongside a number of characters from stories, as yet unpublished, written by Steve and his wife.

Steve Dooley, the artist who painted the mural said: “It has been a great pleasure painting on the walls in the Chagford Library. Making libraries appealing, especially for children, is so important these days. My hope was to create something light and airy yet full of interest and imagination, something timeless that may last for a few generations. Thank you to all involved in this commission and for being brave enough to let me play with my paints on your walls.”

Chagford Library is one of 50 libraries across Devon run by charity Libraries Unlimited. Erica Loram, Library Assistant at Chagford Library said: “We’re so thrilled with this exclusive addition to our library and excited to see the children’s faces when they walk through the door. It wouldn’t have been possible without our incredible Friends Group and of course Steve, who has put so much time and effort into this project. It really is a fabulous addition to the library, brightening up the children’s corner and giving us all a beautiful view to enjoy. We hope people will love it as much as we do when they come to read a book, browse the shelves or use any of our facilities.”