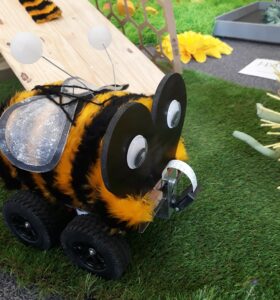 A group of keen coders from Barnstaple Library’s Raspberry Pi group scooped up two awards this month at the international PiWars at Home competition.

The team of eight, known as The Barum Jam Collective, worked together to build DrumbleDrone – a bee-themed robot – to compete in the event. They were awarded 1st place for Artistic Merit, and 3rd place for Best Blog Post in the competition against 21 other teams worldwide.

The group was founded at Barnstaple Library’s Raspberry Pi Jams – regular meetups to learn about and work on digital projects using Raspberry Pi computers. However, due to lockdown restrictions they were unable to meet in person for most of the project. Luckily the library was able to move the sessions online, which allowed the team not only to continue, but to expand.

Tarja Vihonen Morgan, Customer Service Assistant at Barnstaple Library said, “When Covid closed our physical libraries, we moved our library Raspberry Pi Jams online. As far as I know we were the first and maybe even the only Jams online, and we now have someone in our group from as far away as Hampshire. Our team is very diverse, from teenagers to old hats, with everyone playing a vital role.”

She added, “It has been a long journey, made difficult by the fact we were only able to meet face-to-face on the day of submission video filming, but we pulled it together.”

The robot’s name, DrumbleDrone, is a nod to its Devonshire roots, being the old Devon dialect for bumblebee. DrumbleDrone sports a fuzzy black and yellow body, googly eyes, and a rear-mounted ball launcher.

You can read more about DrumbleDrone’s journey to greatness on the team’s blog for which they were awarded 3rd place in the Best Blog Post category at the competition on 10th & 11th July.

Barnstaple Library has been holding Raspberry Pi Jams for the past six years. The jams are open to people of all abilities who would like to learn more about making things with Raspberry Pi computers, and to work on projects themselves and/or in collaboration with others. At the moment they take place online via Discord, but there are plans to resume in-person sessions when safe to do so.

Amy Bell-Worfell, Senior Supervisor at Barnstaple Library said, “This project for PiWars has really helped the group and given them a focus during this period of lockdown. We hope to restart in-library sessions in the Autumn, as schools are now finishing for the Summer break.”

If you are interested in finding out more about the virtual Pi Jams, visit the Barnstaple Library Facebook page or join their Pi Jam Facebook group.