‘Balancing Lifestyle and Health’ was a one-day workshop run as part of the annual library Active Life Active Mind festival by the University of Exeter and Libraries Unlimited on 11 November 2016.

Here, one of the event leaders Dr Martin Moore discusses the event, summarises its discussion, and highlights where future collaborations might lead…

‘Balancing Lifestyle and Health’ was a one-day, participant-focused workshop. It brought together a mixed audience of service users, public health practitioners, health service professionals, clinical commissioners, representatives from community and non-governmental organisations, and members of the general public, all to discuss ideas about balanced lifestyles.

The event itself was divided into four one-hour mini-sessions, framed by a short introductory talk by the organisers. Aside from these ten-minute prologues, the sessions were given over to participants to discuss the issues raised, and to record their conversations.

The programme of the day is appended to this post. However, to briefly recap, session one focused on “living well with illness” – a topic covering everything from illness and identity, to managing daily life. Session two began with an exploration of the successful Books on Prescription scheme, after which participants explored the relations between community and lifestyle balance. Session three (fittingly appearing after lunch so as to alleviate any pre-meal guilt), tackled the tricky subject of “balanced diet”. And session four asked participants what is meant by “work-life balance”, and whether any such balance is possible or even desirable.

Broadly speaking, then, the aim of the event was to simultaneously foster critical discussion, and to facilitate new links, between people who might not usually have sustained contact. By putting members of the general public in touch with service commissioners and public health professionals, for instance, we thus sought to help everyone involved come away with new perspectives, and enable them to develop lasting collaborations.

As might be expected from an event covering quite diverse topics, the day’s discussion was wide-ranging. There were, nonetheless, a number of themes that consistently reappeared throughout the day.

Perhaps unsurprisingly, a number of debates and conversations repeatedly centred on the theme of responsibility and reform, where discussants asked and answered “who is ultimately responsible for maintaining our health and wellbeing?”

Responses were diverse. Some participants raised the point that perhaps individuals have to be ultimately responsible. They argued, for instance, that we ultimately decide our eating habits, and that perhaps we have become too reliant on expert advice. The appropriate response across any number of spheres, they suggested, was to create much more of a cultural emphasis on self-care and self-management, and to orient our systems towards signposting and training, rather than “nannying” and treating.

On the other hand, many other participants highlighted broad structural problems that needed to be addressed. Maintaining health, and living well with illness, for instance, was deemed difficult within profit-oriented systems that only valued individuals for what they could consistently produce and monetise. Those “left-behind” and deemed “useless” suffered financially, physically and mentally, whilst those in work were also being pushed to their limits and scared to disclose health problems. Similarly, unhealthy working practices – such as long hours and poor pay – combined with changing geographies of work to threaten to healthy diets and work-life balance. Unreasonable work demands had resulted in quick, individual “al desko” lunches, which restricted sociability and nutrition. Long commutes reduced time and energy resources available for cooking, caring, and leisure pursuits. New working cultures and even regulations were proposed, alongside important educational programmes for children and adults, to ensure healthier diets and more balanced working and social lives.

Culture, sociability, and community, also reappeared in other discussions.

Throughout the workshop concerns were expressed about community breakdown and cultures of community engagement. There was little consensus about the cause of such decline. Nonetheless, discussants highlighted community and family dislocation as a possible cause for growing rates of isolation, for declining health, and for poorer eating habits. In terms of the latter, the decline of communal eating was felt to prevent transmission of good habits and to divert attention away from social elements of consumption. More positively, participants did praise the work of community-based organisations – such as libraries and arts groups – and felt it offered a way to combat community breakdown. How we can evaluate such work in a pseudo-objective, “outcomes”-focused, funding environment, though, remained a consistent concern. 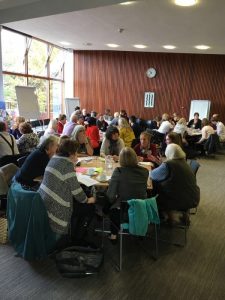 Some participants did see a role for technology here. It was suggested that digital technologies had allowed for new communities and new forms of social activity to thrive. Yet, it was admitted that novel technologies could also be a double-edged sword. Some felt that digital networks still helped bring the loss of “real” local community. Likewise, other participants suggested that, although central to “flexible” working, new technologies also allowed work to become a “24 hour” pursuit. On the one hand, then, new technologies could enable people to better integrate work demands with family responsibilities and leisure pursuits. On the other, emails, “smart” phones, and work laptops could also risk generating new expectations that we should always be available and “connected”.

No “One-Fits-All” Model or Solution

Of course, what worked for one person was not taken to work for another. And in some respects, this was the core message of many discussions.

In dietary terms, the ideal diet varied from person to person, and a consensus appeared that there were no universal responses that could be put into operation to produce “better” or “healthier” diets. According to many participants, such a lack of agreement could be traced to an inability to find coherent messages from various expert sources (or sauces). Such advice needed to be taken with a pinch of salt (and aromatic five-spice). (My apologies for peppering this section with so many bad pun(net)s.)

Likewise, some discussants suggested that defining what was “life” what was “work” was difficult, and that we shouldn’t assume that less work would offer greater joy and “balance”. Life (as supposedly separate from work) could actually be very stressful and demanding. Caring duties could be financially and emotionally stressful, for instance. Equally, vocational jobs, although running the risk of exploitation from demanding employers, could also be incredibly enjoyable. Thus, participants proposed, no single model was preferable, and a holistic approach was needed to ensure we could tailor diets and working lives to our own needs and preferences.

And, in many ways, these final discussions brought out one last recurrent theme: that of the problematics of language. Participants consistently questioned phrases like “balance”, “moderation”, and “work-life”, asking who defined such terms and how. This desire for a new – or at least a clearer – language also appeared in discussions of “living well” and “illness”. Both these terms came in for questioning, and it was suggested that talking about “illness” could be misleading. Similarly, the way in which labels and language could shape a sense of self was raised. For some discussants, diagnoses and labels opened up access to resources, provided a sense of solid identity, and helped explain what was wrong (and thus alleviated anxiety and self-recrimination). For others, defining oneself in terms of a disease or illness – or being defined in such way by others – could restrict employment or social activity, and trap people in a stigma. Finding new ways to talk about these issues was considered crucial.

As can be noted even by the preceding discussion, the event contained a considerable amount of discussion, agreement and debate. And if there was one criticism of the day, it was that we tried to do too much, or at least had to curb discussions that could have filled whole days in themselves.

In spite – or possibly because – of this, the event proved to be extremely well received, and we managed to fulfil our two broad briefs for the day.

However, “Balancing Lifestyle and Health” was only ever intended as an event to lay foundations.

We will soon be making contact with participants to see what sort of events they would like to see in the coming months and years. For ourselves, we believe that running half-day workshops on each of the workshop themes – diet, community, work-life, and living well with illness – would be productive. We would also like to move beyond the city, into Devon more broadly, and perhaps to think in terms of more concrete policy and workplace solutions.

For now, however, we would like to thank everyone who contributed to the day. As organisers we found it incredibly enlightening and invigorating. And we very much look forward to running further events in the future.