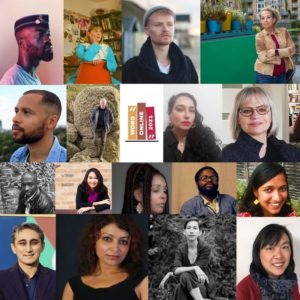 Launched on 15th April with a reading by acclaimed poet, dramatist, performer and designer, Inua Ellams from his debut full collection ‘The Actual, Word Online’ is a virtual live literature tour of libraries, streaming diverse writing talents direct to audiences throughout South West England and beyond.

Word Online is a programme by Literature Works in partnership with library services across the region.

Each event is hosted by a particular local library service. The tour highlights the power of literature to effect positive change by connecting authors from richly diverse backgrounds with new audiences in the South West.

Word Online showcases the work of Black writers, disabled authors, writers from LGBT+ communities, and other voices from under-represented groups to broaden shared experience and celebrate the richness of the current literary scene. Literature Works aims for this programme to provoke, develop and challenge our readers to confront head-on the issues raised by the ‘Black Lives Matter’ movement, by exploring the lived experience of Black, Asian and minority people living in Britain today.

Tour dates run every second Thursday from 15th April – 28th October, 6-7pm. Live-streamed free of charge via Crowdcast, the interactive online events platform that allows for audience interaction and questions. Events are open to everyone, thanks to generous grant support from SWRLS, the South Western Regional Library Service.

“The event with Inua was of a really high quality and it is fantastic to have access to diverse artists online – I live too far away from cities where this type of event is usually available.”

“I’m heartened to hear of your existence and shall look at your other events. Libraries are at the heart of a community.”  Audience comments at the launch event, attended by people from St Austell to Bristol, London, Hull, Birmingham, Brooklyn USA, and Bengaluru India.